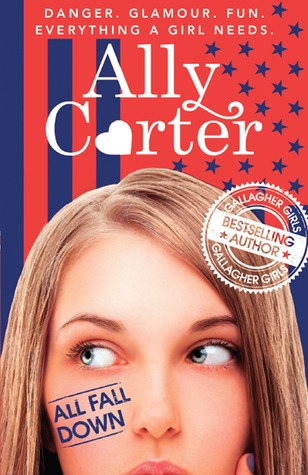 Grace can best be described as a daredevil, an Army brat, and a rebel. She is also the only granddaughter of perhaps the most powerful ambassador in the world and Grace has spent every summer of her childhood running across the roofs of Embassy Row.

Now, at age sixteen, she’s come back to stay – in order to solve the mystery of her mother’s death. In the process, she uncovers an international conspiracy of unsettling proportions, and must choose her friends and watch her foes carefully if she and the world are to be saved.

All Fall Down follows the story of Grace. Following the death of her mother, she is sent to live with her grandfather who lives on Embassy Row.

Grace is consumed by her belief in the fact that her mother did not die by accident – that she was murdered. This belief sets her firmly on the path towards finding out how her mother actually died.

I am a huge fan of anything written by Ally Carter. I loyally followed her Gallagher Girls series from start to finish and I couldn’t wait to get my hands on the first instalment of her new series. It didn’t disappoint!

Ally Carter has a knack for storytelling. She just has this way with writing that draws you in. I don’t think it has ever taken me more than two sittings to finish her books. All Fall Down is no different, it’s gripping and action pact from start to finish. As always there is a signature twist at the end.

One thing that needs to be mentioned is how hilarious/interesting the politics in this novel is. The interesting part due to how the grown ups behave towards one another and the hilarious part being all of the embassy’s children trying to mimic and follow all the norms between the countries.

The only gripe I will ever have with this novel is the cover. For  young adult, it is awful. I would definitely favour a cover change or a switch to the U.S edition at this point. Apart from that I can’t wait for the sequel. See How They Run (LOVE THE TITLE) comes out January 5th, 2016!

I was sent this for free by the publisher in exchange for an honest review.

One thought on “Review: All Fall Down by Ally Carter (Embassy Row #1)”