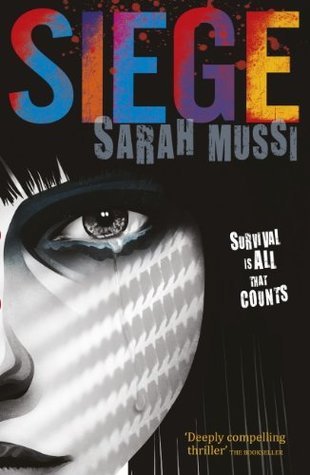 Goodreads Synopsis:
Leah Jackson – in detention. Then armed Year 9s burst in, shooting.
She escapes, just. But the new Lock Down system for keeping intruders out is now locking everyone in. She takes to the ceilings and air vents with another student, Anton, and manages to use her mobile to call out to the world. First: survive the gang – the so-called ‘Eternal Knights’.  Second: rescue other kids taken hostage, and one urgently needing medical help.  Outside parents gather, the army want intelligence, television cameras roll, psychologists give opinions, sociologists rationalise, doctors advise – and they all want a piece of Leah. Soon her phone battery is running out; the SAS want her to reconnoiter the hostage area …  But she is guarding a terrifying conviction. Her brother, Connor, is at the centre of this horror. Is he with the Eternal Knights or just a pawn? And is all of this part of some bigger game in which they are all being played?  She remembers. All those times Connor reached out for help … If she’d listened, voiced her fears about him earlier, would things be different now? Should she give up her brother? With only Anton for company, surviving by wits alone, Leah wrestles with the terrible choices …

Siege is novel set in the not so distant future were social divides are rife and schools know as “challenge academies” are frowned upon in society. These academies are used to educate children who live on the breadline. In  a world were even the free schools have become private, it is the only place they can go for education.

When I read the synopsis I instantly thought this would be a hostage, get them out, save the day and that would be the end. However, when I started reading and the siege happens within the first few chapters, I didn’t know where this would go. In the end I found that it was more of a question of where this novel didn’t go. This is so much more than your average hostage novel.

Our main character comes in the form of Leah Jackson. She is an incredibly strong and flawed heroine. Her mum has severe depression meaning that she has to look after her little brother, Connor and her little sister Sally. I saw flawed because she is not perfect. She has suffered hardships and pulled through and although life is a daily struggle she still looks after her family because she is able to.

A secondary character that stood out for me was Anton. When the hostage first beings, he and Leah both climb in to the ceiling to  hide. He begins to make commentary on why this whole situation has come to be. He says how  not educating the lower class in society, hoarding them up in these kinds of schools and making them see no future for themselves has made them become like this. There are few very valid points in the novel and I found it incredibly thought provoking as the oppression and demonstration of the lower classes is something that we see all of the time.

The novel has really good pacing. I never found a chapter dull and a purpose, whether short term or long term, was always clear. Everyone’s reactions were plausible to the violence and even though some actions by Leah and Anton were horrifying, you understood from the explained situation and context that they were completely necessary for them to survive.

This was a huge surprise for me. I genuinely did not think I would like this that much. It is incredibly refreshing to find a novel that equally thought provoking and frightening because it is all so plausible. I would recommend this to people who want a realistic dystopia with hints of government conspiracy in equal measure.