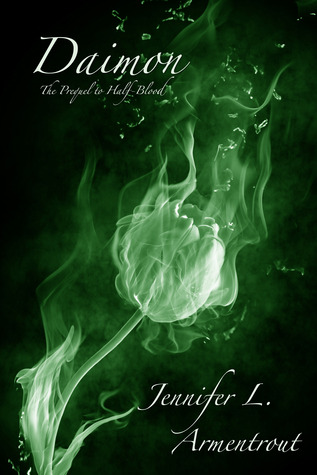 “Love in my world usually ended up with someone hearing ‘I smite thee!’ as she was cursed to be some lame flower for the rest of her life.”For three years, Alexandria has lived among mortals–pretending to be like them and trying to forget the duty she’d been trained to fulfill as a child of a mortal and a demigod. At seventeen, she’s pretty much accepted that she’s a freak by mortal standards… and that she’ll never be prepared for that duty.According to her mother, that’s a good thing.But as every descendant of the gods knows, Fate has a way of rearing her ugly head. A horrifying attack forces Alex to flee Miami and try to find her way back to the very place her mother had warned her she should never return-the Covenant. Every step that brings her closer to safety is one more step toward death… because she’s being hunted by the very creatures she’d once trained to kill.The daimons have found her

A short review for a short novella. Daimon is a 69 page prequel novella to the Half-Blood series and although not an essential read, I still recommend picking this one up if you want to delve more in to the world of The Half-Blood series.

Daimon is set in the days running up to the beginning of Half-Blood. It follows the same protagonist and we get to see how she is getting on in the mortal world. We learn a lot more about her. She is no longer popular and she is just another girl which completely out of her comfort zone. We also get to see her with her mother and how affectionate and protective of her she is.

In terms of plot, this novella does not add much to the series, but it certainly adds to Alex’s character. For that reason, I say it is definitely worth the read.

I read this prequel after I read Half-Blood and I can honestly say it would not make much difference which way round you read them. The novella basically could be put at the start of the full novel and it would be perfectly in sync. 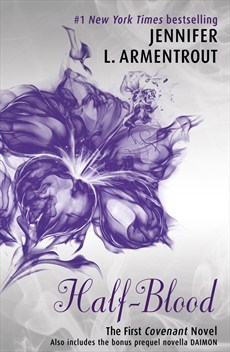 “The Hematoi descend from the unions of gods and mortals, and the children of two Hematoi – pure-bloods – have godlike powers. Children of Hematoi and mortals – well, not so much. Half-bloods only have two options: become trained Sentinels who hunt and kill daimons or become servants in the homes of the pures.

Seventeen-year-old Alexandria would rather risk her life fighting than waste it scrubbing toilets, but she may end up slumming it anyway. There are several rules that students at the Covenant must follow. Alex has problems with them all, but especially rule #1:

Relationships between pures and halfs are forbidden.

Unfortunately, she’s crushing hard on the totally hot pure-blood Aiden. But falling for Aiden isn’t her biggest problem – staying alive long enough to graduate the Covenant and become a Sentinel is. If she fails in her duty, she faces a future worse than death or slavery: being turned into a daimon, and being hunted by Aiden. And that would kind of suck.”

Yet another JLA book finished in one sitting. I am on a roll. Well, JLA is.

Half-Blood follows the story of 17 year old Alex. A half-blood herself, she has chosen the path of a Sentinel. There is a small problem of graduating first, but there is a lot more to worry about. From leaving the Covenant for no reason to being hunted by daimons (pronounced dee-mons) you can tell from the start that this is going to be a journey for her.

I think it is going to be a given that I love a JLA book from now on. As I said before, I finished this in one sitting and I could not put it down. This book just kept on giving whether it be character development, mythology or both at the same time.

I loved all of our characters in this novel. Alex (she has a pretty cool name right ;D) although annoying at times was a perfect heroine. She was stubborn and strong in equal measure. Sometimes characters aren’t there to be liked or agreed with. You develop a certain level of empathy and understanding with her that makes her actions justified.

Half-Blood has some brilliant mythology. I found the whole concept of the Half-Bloods and Hematoi’s so intriguing. I loved finding out about the gifts that  they had  and following the politics between them. I think this is a subject that has a lot more to give and I can’t wait to see it develop more.

This is a very strong start to a series. It struck the perfect balance between establishing the foundations of a series and being a worthwhile read in itself. I will definitely be continuing the series!

“Dying sucks–and high school senior Ember McWilliams knows firsthand. After a fatal car accident, her gifted little sister brought her back. Now anything Ember touches dies. And that, well, really blows. Ember operates on a no-touch policy with all living things–including boys. When Hayden Cromwell shows up, quoting Oscar Wilde and claiming her curse is a gift, she thinks he’s a crazed cutie. But when he tells her he can help control it, she’s more than interested. There’s just one catch: Ember has to trust Hayden’s adopted father, a man she’s sure has sinister reasons for collecting children whose abilities even weird her out. However, she’s willing to do anything to hold her sister’s hand again. And hell, she’d also like to be able to kiss Hayden. Who wouldn’t? But when Ember learns the accident that turned her into a freak may not’ve been an accident at all, she’s not sure who to trust. Someone wanted her dead, and the closer she gets to the truth, the closer she is to losing not only her heart, but her life. For real this time”

A standalone young adult fantasy tickles my fancy and leaves me sceptical in equal measure. I think striking the balance between having the right amount of character development, world building and plot in a standalone can be difficult. With young adult being saturated with series and trilogies, I was happy to find something different in Cursed.

Cursed follows the story of Ember. Her baby sister, Olivia, brought her back with her touch after a car accident and now she has a death touch. Anything she so much as grazes with her thumbs will die within seconds. This makes daily life difficult and with her flesh toned gloves in tow, makes her high school life a living hell.

This is probably one of my favourite standalone novels of all time. It provides all of the above with the perfect balance and I finished it in one sitting!

We don’t learn too much about how people with certain gifts came to be or how they are policed. All we know is there is “The Facility” and a gentleman named Cromwell makes it his duty to look after other children like this. This was enough for me considering it was more about the characters and their development rather than the fantasy.

I definitely have a soft spot for our main character. Ember is easy to empathize with, strong willed and level headed. At points in the novel she is taken out of her comfort zone and introduced to new things. Her reactions to these are so plausible! Recently I have found main characters to be quite limp and Ember definitely breaks that streak for me.

The mystery aspect of this novel is so gripping! Following Ember on her journey to finding how and why the car crash with her family happened kept me guessing and the twist at the end was so well done!

This was my first taste of JLA and it definitely won’t be my last! Half-Blood here I come!