This world is trying to kill Lily Proctor. Her life-threatening allergies keep her from enjoying experiences that others in her hometown of Salem take for granted, which is why she is determined to enjoy her first high school party with her best friend and longtime crush, Tristan. But after a humiliating incident in front of half her graduating class, Lily wishes she could just disappear.

Suddenly, Lily is in a different Salem—one overrun with horrifying creatures and ruled by powerful women called Crucibles. Strongest and cruelest of them all is Lillian . . . Lily’s other self in this alternate universe.

What makes Lily weak at home is what makes her extraordinary in New Salem. In this confusing world, Lily is torn between responsibilities she can’t hope to shoulder alone and a love she never expected.

Trial by Fire follows the story of Lilly Proctor. Her persistent allergies stop her from enjoying her life to the full. After a chain of events including and embarrassing situation with her long time crush, she finds herself in her alternate version of an hometown of Salem.

I am a huge fan of Angelini’s Starcrossed Trilogy so when I found out that she was writing a new trilogy about witches, I was on board regardless of the story.

Trial by Fire did not disappoint. The writing style is incredibly easy to follow, it has a way of just bringing you in to the world and the story. Lilly is not the most likable character and but it didn’t take away from the plot at all.

When it comes to witch novels you tend to find that there is little explanation behind the characters abilities. It is simply magic. I adored the concept of Crucibles and Mechanics. To have some level of rhyme and reason behind a witch’s abilities made the read so interesting!

My only gripe with this first instalment is the ending. Josephine Angelini is notorious for painful cliff-hangers. Trial by Fire is dangerously close to not being finished. Luckily its sequel,  Firewalker, comes out August 27th, 2015. 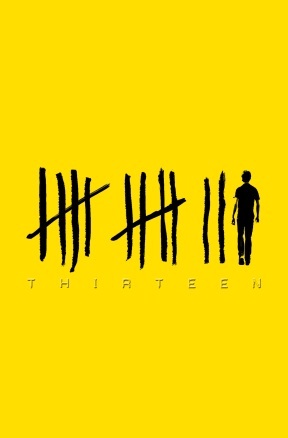 Goodreads Synopsis
Born at midnight in London, on the stroke of the new millennium, Adam is the target of a cult that believes boys born on this date must die before the end of their thirteenth year. Twelve boys have been killed so far. Coron, the crazy cult leader, will stop at nothing to bring in his new kingdom. And now he is planning a bombing spectacular across London to celebrate the sacrifice of his final victim: Adam

Thirteen follows the story of Adam Grant. He is 13 years old and little does he know the he is being followed and every single one of his moves is being tracked. He is being tracked by a cult known as “The People” led  by Coron  who firmly believes that he must sacrificed in order for a new world to begin.

I thoroughly enjoyed this read. It is nothing like I have ever read before. The concept of cults is something that I usually laugh at but “The People” is genuinely frightening and I loved all of our characters. Even the villains. The novel is written from two points of view starting off with Coron, the leader of “The People”. We then get to meet out main character.

Our main character comes in the form of Adam Grant. I loved him from the beginning. His first chapter consists of him punching the resident bully in the face because he was picking on one of his best friends. You also feel sorry for him because of his situation. He was abandoned by his mother and had to be adopted in to his new family.

Even though there is no way you could empathize with him, I really did enjoy Coron’s role and presence in the novel. He is a brilliant villain in a sense the he is twisted in the purest form. He is absolutely vile, his soul is black and there is no chance of redemption. He is the villain through and through. There is no reasoning with him and his thought processes are so distorted.  I love seeing characters like this.  In my line of reading they are few and far between.

The novel is split in to four parts. In some cases it was because there was a period of time from one chapter to the next. Other were because they provided a turning point in the novel. As I said before the novel is written from two points of view – Coron and Adam’s – most of the time I enjoyed Adam’s part the most but I was glad to the insight of both parties. It also included chapters from the kills running up to number 13. They were brutal and fabulous. The plot had good pacing and the purpose of the characters missions were clear.

Overall this was a brilliant read. We have a strong main character and excellent back up. We have an old school evil villain and a plot where time is about to run out for all of them and danger is around the next corner. I would recommend this to anyone who wants something different and strong male lead.

I had difficulty tagging this. It is young adult but our main character is at the younger side of that at 13 years old. If the main characters in this novel were 16/17 years old, the events still would have been plausible. Thirteen is also quite violent in some places.  But again it is no more violent than the average video game or horror/action movie that 13 year olds play nowadays, even what video games I played when I was around that age.

I don’t know what this is marketed as, but I assume that it is aimed at the whole YA spectrum, young and old. I think this is written by someone who has given credit to the younger side of his audience. I think there is a double standard with books and violence nowadays and thankfully it seems like this novel does not adhere to this.

sequels: at the end of the novel it says he is working on a sequel. The novel did not end on a cliffhanger as such but there was a “to be continued” which I am always a fan.

Finally, just a comment on the cover art. I absolutely love it. It also has some stunning art around the spine and edges, some of you may have seen it on my instagram!