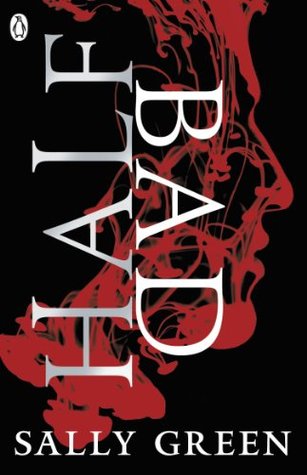 Title: Half Bad | Author: Sally Green | Penguin | Half Life #1 | 400 pages | Young Adult | Fantasy | 4 Stars Source: Bought and Net Galley | Release Date: March 4th 2014
Goodreads
Goodreads Synopisis
Half Bad by Sally Green is a breathtaking debut novel about one boy’s struggle for survival in a hidden society of witches.
You can’t read, can’t write, but you heal fast, even for a witch.
You get sick if you stay indoors after dark.
You hate White Witches but love Annalise, who is one.
You’ve been kept in a cage since you were fourteen.
All you’ve got to do is escape and find Mercury, the Black Witch who eats boys. And do that before your seventeenth birthday.
Easy.

Half Bad follows the story of Nathan. He is a Half Code meaning that his is half White Witch and half Black Witch. His Giving Ceremony needs to be preformed by a parent or grandparent in order for him to become a full witch, if the ceremony is not preformed Nathan will end up dying before his 18th birthday.

Overall I really enjoyed this novel. I enjoy the premise, logistics and I thoroughly enjoyed following our main character on his journey. But I did pick a few faults from it, I would rather get them out of the way first!

First of all the book didn’t start for me until page 100. It took me a while to connect with Nathan and even though there were events unfolding, I did not find them very stimulating and I just found it difficult to get in to overall. Another thing I had a problem with was the fact that we son’t discover more about Nathan’s Mother and father. We know that his mother is a White Witch and his father is a Black Witch but that is about it. Maybe it will come out in a sequel but I would have liked to have seen more in this one.

After the initial stumbling I had with this novel, I really enjoyed how it was structured. I starts off with current events, then in the next part it goes back in time to where it all began and then it goes back to current events. It all flowed really well and wrapped up nicely.

One  of the main things I liked about this novel was the logistics and concepts. White Witches, Black Witches, Whets (baby witches!), Fains (Humans) and Giving Ceremonies – This is when a witch turns 17 years old they receive three gifts  and have to drink the blood of a parent or grandparent in order to become a witch. I also liked the politics when it came to the White Witch’s council, how much they despised black witches and how corrupt they seemed!

Overall I really enjoyed this novel. It is a strong start to a promising series and I will definitely be getting the sequel (which is called Half Wild) when it comes out!