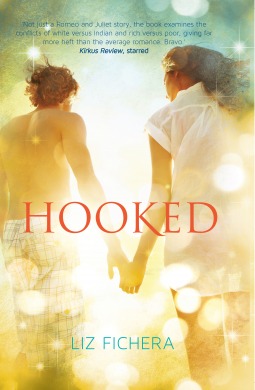 Goodreads Synopsis:
When Native American Fredricka ‘Fred’ Oday is invited to become the only girl on the school’s golf team, she can’t say no. This is an opportunity to shine, win a scholarship and go to university, something no one in her family has done.  But Fred’s presence on the team isn’t exactly welcome — especially not to rich golden boy Ryan Berenger, whose best friend was kicked off the team to make a spot for Fred. But there’s no denying that things are happening between the girl with the killer swing and the boy with the killer smile…

GET HOOKED ON A GIRL NAMED FRED.

Review:  I really didn’t know what I wanted from this novel. I didn’t have much except the synopsis to go by and to be honest I didn’t expect that much. Golf has never been my thing. I am the kind of person who makes an epic swing and looks down to find the ball is still there mocking me. So I was just going in to this to for the romance.

The story follows Fred Oday. She is on of the small handful of Native Americans at her high school. She is self learned golf player who gets invited on to the boys’ only golf team sans tryout, much to the dismay of Seth the person who loses his place to her and Ryan – Seth’s best friend.

In terms of MC’s we have a brilliant pair. Fred initially is timid, quiet and so easy to relate to. Her world at home on the ‘Rez’ (reservation) is far from perfect with her semi-alcoholic mother and golf is her only escape. Then we have Ryan. I initially couldn’t stand him. He seemed to lack the ability to have his own mind and just followed the crowd. This was regardless of whether it hurt someone or not. He also had problems at home too. This soon changed though. His character development was perfect and so was Fred’s. By each chapter you could see how they both changed. Ryan realizing the error of his ways and Fred finally getting feisty and standing up for herself!

As I said before I didn’t know where the plot could go. I was surprised how well it seemed to flow. It had a good pace, didn’t rush anything (NO INSTALOVE! YAAY) and the ending tied things up quite nicely. There were also some quite hefty issues in this novel. Things such as racism and divides between the rich and the people who seemed (stress the seemed) less fortunate came up at points. These issues were dealt with and written brilliantly. You knew they were on going issues but they were constantly mentioned to bore you.

The way that the Native American culture and it values are protrayed beautifully. There is no detail spared. It is blatantly obvious that Fichera has done research and respect authors so much when they so much when they do that. Overall this is fabulous read. With original twists to the plot and bewitching romance, I simply could not put it down. I urge you all to get hooked on a girl named Fred!