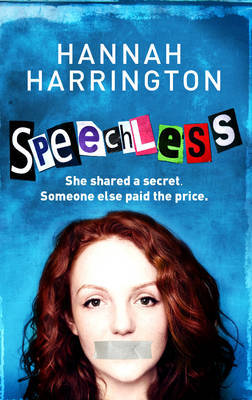 “Everyone knows that Chelsea Knot can’t keep a secret

Until now. Because the last secret she shared turned her into a social outcast—and nearly got someone killed.

Now Chelsea has taken a vow of silence—to learn to keep her mouth shut, and to stop hurting anyone else. And if she thinks keeping secrets is hard, not speaking up when she’s ignored, ridiculed and even attacked is worse.

But there’s strength in silence, and in the new friends who are, shockingly, coming her way—people she never noticed before; a boy she might even fall for. If only her new friends can forgive what she’s done. If only she can forgive herself.”

Speechless follows the story of Chelsea – someone who can’t save a secret for love nor money. One day she lets a secret out that has serious repercussions. at this point she decides to take a vow a silence as she believes that when she opens it brings nothing but sadness.

I initially was not keen on Chelsea (this is the whole idea – you are not supposed to like a rat.) She is your typical Queen B sidekick. She lacks a mind of her own and follows her groups actions and thoughts without question. She is unintentionally cruel and never thinks of how her rumours harm people. This changes though towards the middle of the novel. She sees the error of her ways and karma hits her hard. She grew up and matured beautifully before our eyes.

in terms of plot I have to say I wasn’t to keen to start with. Her vow of silence initially came off as childish for me. But it’ s effectiveness shines through in the end stories unfolded that no words could ever explain. secondary characters made this. Sam was the perfect love interest, Asha the noble and new found best friend and the crew from the diner made the backdrop.

There are some fab messages in this novel. Forgiveness, redemption and the fact that every action always had an equal and opposite reaction. The insults and stick Chelsea receives is cruel and tear jerking and the ending is perfection.

I urge fans of novels such as Before I Fall. A fab coming of age novel!